I Am: a Woman who has lived, loved, laughed and launched from one great adventure to another. I am a Mother to my son, devoted Wife to Simon; I am a Daughter, Sister, niece, Nana and friend to a close circle of friends.

Simon and I met only a year before my initial diagnosis and we married during one of my phases of remission, so this cancer has been a big part of our story unfortunately. The threads of my life are woven throughout a family and communities to make a beautiful rich tapestry and so this disease affects more than just myself. It affects all those whose lives are entwined with mine.

I qualified as a Registered Nurse in 1986 which opened up so many opportunities for me to travel over the years, including Australia for a little while. During the latter half of my career I specialised in Palliative Care, a role that taught me so much about coping with the cancer that I now have. I have loved my work as a Macmillan Nurse and Palliative Care Clinical Nurse Specialist but my career came to an abrupt end through ill health when I was not mentally or physically fit enough to fulfil my work commitments after surgery and chemotherapy.

I retired through ill health in 2016 and there is never a day goes by when I don’t miss working within such an amazing team of human beings. I realise that I am not in a position to be in that role anymore but from the years of working with palliative patients I feel like they gave me the gifts of coping, of hope and of keeping going even in the face of adversity.

I now use my nursing experience in a slightly different way to campaign for better treatment of this rare sub-type of Ovarian Cancer and to support others sharing the same story as mine. Aside from my career I have loved and still love many other aspects of life.

The essence of me is wrapped up in my connection with the Earth and I am never happier than when immersed in nature, amongst wildlife and animals. For a time I volunteered as a Wildlife rescue driver which involved collecting injured wildlife and transporting them to the local wildlife rescue centre. I belonged for quite some time to my local Badger group which I adored because I could be involved in all aspects of protecting these beautiful creatures, rescuing them, releasing them back into their habitat and monitoring the setts where they live. I stopped my voluntary work after chemotherapy because I never regained a fitness level that would allow me to do what I used to do.

These days, I spend time wandering through the trees and watching Trail Cam footage of all the amazing wildlife in our own woodland. Simon and I purchased this little piece of paradise in the New Forest and became guardians of a small woodland which is one of the most amazing experiences of our lives and will be part of our legacy in the future.

I am an avid lover of music, love live gigs and I’m a typical rock-chick/ hippy. I am more at home sat around a camp fire singing, drumming and dancing with fire-fans than dressing up for fancy dinners. Through my career and now my personal experience, Cancer has shown me how to love the simple things in life and to embrace all that it has to offer.

The cancer was found when: when I developed sudden pain around my Bladder area one night. It was so acute that it woke me up and I couldn’t get back to sleep again. My instinct told me that this was not a pain to ignore and so I went to see my GP.

Although the pain was deemed not to be anything untoward and attributed to a menopausal issue, I insisted that I had blood taken and further investigations. It wasn’t just the pain but the ongoing fatigue, intermittent constipation, bloating and feeling full quickly when eating. The blood results showed a raised CA125 and subsequent ultrasound scan revealed a small ovarian cyst.

I was referred to a Gynaecologist who insisted the cyst was very small and he calculated my risk of cancer to be very minimal through the “Risk of Malignancy Index”. I remember him drawing a confident circle around the score followed by an exclamation mark in an effort to reassure me …. but it didn’t! Following a Laparoscopy to remove the Ovarian Cyst it revealed High Grade Cancer so I was referred to a Gynae-Oncology surgeon for Hysterectomy, removal of my remaining ovary and Omentum.

The Histology for this revealed Borderline Ovarian Tumours which really threw me. This disease is not exactly cancer, it’s not even considered pre-cancer yet it is not benign either so deemed to be good news on the cancer front. Less than a year later, after plenty of reassurances from the surgeon that I was fully cleared of the disease during surgery I presented with the same symptoms that I had pre-diagnosis. Again, I was reassured that I was not likely to have recurred but with my insistence I had a CT scan to double check which revealed a “node”. This was removed surgically and found to be Low Grade Serous Ovarian Cancer!

How your donations would impact me:  How your donations will help me and others like me is truly indescribable.Since my diagnosis of Low Grade I have had six cycles of a combination of chemotherapy drugs which made me extremely sick and I lost all the hair on my body. I had very long silver-blonde Dread-Locks which was my crowning glory and very distinctive so imagine how devastating this was. I was prepared to do this though to save my life, however what I did not fully realise at that time was that this disease is actually very resistant to chemotherapy.

I am left with collateral damage following the chemotherapy ie numb fingers and toes, tinnitus, fatigue, cataracts in both eyes and poor memory yet I still recurred less than a year after I completed the course of treatment. In the absence of an alternative treatment protocol, surgery followed by chemotherapy is the standard treatment for Ovarian Cancer. No distinction is made between High Grade and Low Grade Ovarian Cancer yet the two behave so very differently.

Since then I have more recurrences having had hormone blocking medication since chemotherapy which I had to stop due to the severe side effects I experienced. As I write this I am on my third recurrence, finding myself with limited options and in limbo right now as I await the next steps.

What I would say to someone else going through this: Throughout my story I have known when things for me have not been right and been my own advocate but it worries me that many women don’t have the same knowledge that I do and trust that the Doctor is always right. What I would say to any woman with this disease is to be honest and open about your body and what is happening. Nobody knows your body like you do so the Doctors are reliant on what you tell them. If you don’t feel heard, keep repeating yourself or seek a second opinion until no stone has been un-turned.

I would advocate that women with this disease read about what different treatment options are out there and to be your own advocate. Don’t be afraid to challenge Doctors and to tell them what you feel is right for you. If they disagree with you they will be able to explain and justify why this is. Any discussions and plans should always be with your fully informed consent.

With Low Grade you have time to weigh up options and not rush on in with sheer panic. This is a slower growing cancer and it is worth taking time to really get to grips with what the next steps should be. Above all, be kind and patient with yourself because coping with the news that you have this disease is very challenging. 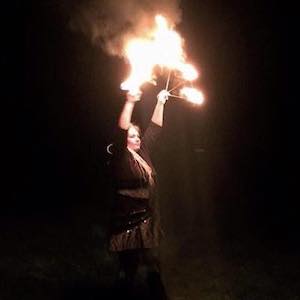 Me dancing with Fire-Fans at a festival in August 2013 before cancer happened. Me and my Husband-to-be in June 2013 before Cancer happened. Me and my husband in December 2014 after the first cycle of chemotherapy Simon shaved off my dreadlocks and then shaved all his own hair off in support of me.